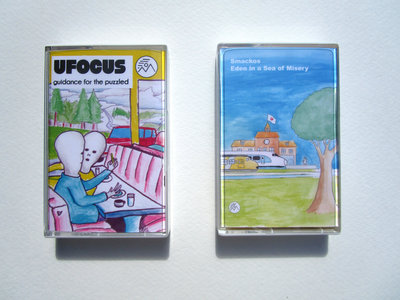 I had copied these tapes already in 2015 and 2016 but they never went in distribution. Thus they have been ‘fermenting’ for almost 6 years in my cellar dungeon in Scheveningen Holland. Its magnetic particles becoming even more complex and earthy, giving the sound tertiary aromas and deep flavours. The reason for the tapes rather long postponed released was that the computer with the tape inlay artwork stopped working in 2016 and I lost interest and then found them again this year and made some new tape inlay artwork etc.etc.etc.very exciting story ;p

Some notes about these releases:

The smackos - Eden in a Sea of Misery cassette does not contain the track ‘Lobby Dauphine’, that one was added in 2020 as a bonus track on the digital release. Also the track ‘we will meet again im abfallberg Der Raumzeit’ is a different more rough sketched ‘tape filler’ version that is just a loop sort of.

The UFOCUS - Guidance for the puzzled tape contains an extra track called Archetypes and Patterns and an extra tape filler soundscape.

The UFOCUS - GUIDANCE FOR THE PUZZLED has also been re-issued on 2xLP recently and iis available at your record store, I don't have any copies of that LP to sell here as they are all in distribution.

The 2 tape pack comes with Legowelt painting postcards and stickers

You can download the digital Smackos & Ufocus release for free as I put them on pay what you want.

Includes unlimited streaming of Eden In A Sea Of Misery via the free Bandcamp app, plus high-quality download in MP3, FLAC and more.